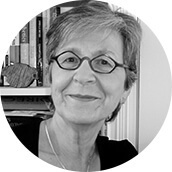 “When I began teaching modern Canadian art history in the 1980s, Harold Town’s work presented a puzzle. Why was this artist, whose youthful Abstract Expressionist works had fetched the highest prices for a living Canadian artist, now universally dismissed by the art world? What was the common denominator for his later diversity of styles and media? Since his death in 1990, appropriation, quotation, and dizzying complexity have become common artistic strategies. In another reversal of fortune, his later works now look exciting and relevant.”

Gerta Moray is a Professor Emerita of the University of Guelph, where she taught art history in the School of Fine Art and Music from 1989 to 2005. She continues to write and lecture on modern and contemporary art, women’s art and feminist theory, and Canadian art seen within local and international contexts. Moray is the author of Mary Pratt (McGraw-Hill Ryerson Press, 1989), with co-author Sandra Gwynn; and Unsettling Encounters: First Nations Imagery in the Art of Emily Carr (UBC Press, 2006), which won a Clio Award from the Canadian Historical Association and was shortlisted for British Columbia’s National Award for Canadian Non-Fiction. She has published articles in the Journal of Canadian Studies, RACAR, The Burlington Magazine, Canadian Art, and C Magazine, contributed chapters to books, and written exhibition catalogues for artists including Suzy Lake, Jakub Dolejs, Mary Kavanagh, Natalka Husar, and Margaret Priest. Born in Czechoslovakia, Moray was educated and began her career in England. In 1970 she moved to Toronto, where her two daughters were born. She holds a PhD in the History of Art from the University of Toronto, a Postgraduate Diploma in Art History from the Courtauld Institute, and an MA in Modern History from the University of Oxford. In the U.K. she has taught at the Universities of Sheffield, Stirling, and Edinburgh, and in Canada at the Universities of Guelph and Toronto (Scarborough Campus), Nova Scotia College of Art & Design, and OCAD University.