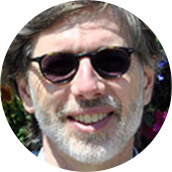 “Jack Chambers’s art was a strong presence for me when I taught at Western University (1985–2000). He was a legend. I knew people who knew him, and many of his best works are in London, Ontario. I explored what I call his ‘radical classicism’ in the context of two Chambers exhibitions in 2011, one in London and one in Toronto. The more you know about his work and ideas, the more there is to see and to think about.”

Mark A. Cheetham is professor of art history and a Senior Fellow at Massey College, University of Toronto. He was the principal investigator for CACHET (Canadian Art Commons for History of Art Education and Training), funded by a three-year Partnership Development Grant from the Social Sciences and Humanities Research Council of Canada (SSHRC), 2013–16.

Cheetham has published extensively on Canadian, European, and American art theory, art, and visual culture from 1700 to the present and is active as a curator of Canadian art. He is the recipient of a John Simon Guggenheim Memorial Foundation Fellowship, a Sterling and Francine Clark Art Institute Fellowship, a Connaught Research Fellowship, and a Chancellor Jackman Research Fellowship in the Humanities from the University of Toronto, as well as several SSHRC research grants, the Edward G. Pleva Award for Excellence in Teaching (University of Western Ontario), and the Northrop Frye Award for teaching (University of Toronto). In 2006 he received the Art Journal Award from the College Art Association of America. He has received two awards from the Ontario Association of Art Galleries for curatorial work: in 2008 the long essay award and in 2011 the exhibition of the year award for his co-curated exhibition Jack Chambers: The light from the darkness, silver paintings and film work.