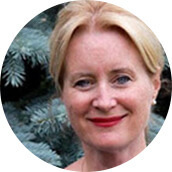 “From the beginning, it was Jean Paul Lemieux’s spirit of independence that fascinated me. He was a painter whose modernism accorded with his own essential personality, and he followed the path of figuration in parallel with but separate from the artistic currents of his time. My published research on his work is the result of my long acquaintance with the paintings held by the Musée national des beaux-arts du Québec, the best and most representative Lemieux collection in the country. To that opportunity for close study was added the challenge of fairly and accurately portraying this atypical artist. And there was an affinity: our shared unconditional love for Quebec City, where I too was born and grew up.”

Michèle Grandbois is currently an independent researcher. She holds a doctorate in history from the Université Laval, and she taught art history before moving to the Musée national des beaux-arts du Québec (MNBAQ) in 1987 as curator of the museum’s collection of works on paper and then of its collection of modern art. She retired from the museum in 2014.

In addition to her activities in documentation, public representation, and expansion of the MNBAQ collections, Grandbois coordinated, directed, or co-directed some thirty exhibitions during her time as curator. She is the author of numerous monographs on Canadian artists, including Jean Dallaire, Clarence Gagnon, and Jean Paul Lemieux. Among her thematic writings are L’art québécois de l’estampe, 1945-1990 and (co-written with Anna Hudson and Esther Trépanier) The Nude in Modern Canadian Art, 1920–1950, winners in 1996 and 2011 respectively of the Award of Outstanding Achievement in Research from the Canadian Museums Association. She was general editor of the book Marc-Aurèle Fortin: L’expérience de la couleur (Marc-Aurèle Fortin: The Experience of Colour), which was awarded the Prix Marcel-Couture at the 2011 Salon du livre in Montreal. Her last project as curator of the MNBAQ was the exhibition Morrice and Lyman in the Company of Matisse, presented in Quebec City in the summer of 2014.

Always seeking deeper understanding and animated by her desire to create greater public awareness of art history, Michèle Grandbois now devotes herself to compiling a catalogue raisonné of the works of Jean Paul Lemieux, while still pursuing her writing projects on Canadian modern art.