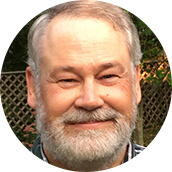 “I vividly remember seeing Nakamura’s August, Morning Reflections for the first time at the National Gallery of Canada. It was like finding an oasis. The enigmatic beauty and engaging simplicity of his work has sustained me ever since.”

John G. Hatch is an associate professor of art history at Western University in London, Ontario. He served as Chair of the Department of Visual Arts from 2016 to 2021 and as an Associate Dean for the Faculty of Arts and Humanities at Western from 2009 to 2015. Hatch’s academic career began with a degree in economics, but after a couple of years in private industry he returned to school to study art history, which led to a PhD in art history and theory from the University of Essex, U.K. His dissertation examined the impact of the physical sciences on modern art.

Hatch’s research has focused on the interstices of art and science, particularly in the twentieth century. However, his first published articles looked at geometry in Greek architecture and Keplerian astronomy and religious mysticism in the churches of the Baroque architect Francesco Borromini. This last, originally published in 2002, was reprinted in 2015 in a two-volume anthology on architecture and mathematics. His numerous articles dealing with science and modern art have ranged from the influence of wave patterns and Machian epistemology on the paintings of František Kupka to the adaptation of the relativistic theories of Henri Poincaré, Hendrik Lorentz, and Albert Einstein in the art and architecture of El Lissitzky and Theo van Doesburg. Recently Hatch’s attention has turned to astronomy, publishing studies on works by Robert Smithson, Max Ernst, Anselm Kiefer, and Shi Zhiying.

Hatch’s interest in art and science drew his attention to the art of Paterson Ewen and Kazuo Nakamura. He is the author of the ACI volume Paterson Ewen: Life & Work.