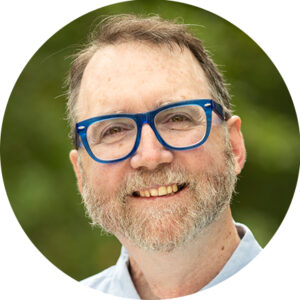 “By overcoming pain and isolation to create a cheerful world of nostalgic optimism, Maud Lewis has inspired generations. The Art Gallery of Nova Scotia has preserved Maud Lewis’s legacy since the gallery’s inception, a trust that I took my turn upholding over my tenure as a curator and as Director. I remain committed to celebrating an artist who embodies so much of what makes Nova Scotia unique.”

Ray Cronin is an author and curator who lives in Nova Scotia. He is a graduate of the Nova Scotia College of Art and Design (Bachelor of Fine Arts) and the University of Windsor (Master of Fine Arts). Raised in New Brunswick, Cronin returned to Fredericton in 1993 where he worked in literary publishing, eventually becoming a full-time writer, including as arts columnist for the Daily Gleaner (Fredericton) and Here (Saint John), as well as being an artist and freelance curator. In 2001 he moved to Halifax as Curator of Contemporary Art at the Art Gallery of Nova Scotia, and eventually Senior Curator. From 2007 to 2015, he was Director and CEO of the Art Gallery of Nova Scotia.

He is the founding curator of the Sobey Art Award, Canada’s premiere award for the visual arts, and the author of numerous articles and reviews for Canadian and American art magazines, including Canadian Art, Border Crossings, Sculpture, and Espace art actuel. Cronin is editor-in-chief of Billie: Visual ∙ Culture ∙ Atlantic.

He has curated numerous exhibitions, including the nationally touring Arena: The Art of Hockey; Nancy Edell: Selected Works 1980–2004; Thierry Delva; and Graeme Patterson: Woodrow. He recently curated the 2021 Windsor-Essex Triennial of Contemporary Art.

His e-books Alex Colville: Life & Work and Mary Pratt: Life & Work were published by the Art Canada Institute in 2017 and 2020. He is the author of seven other books of non-fiction, including Our Maud: The Life, Art and Legacy of Maud Lewis; Alex Colville: A Rebellious Mind; Mary Pratt: Still Light; and Gerald Ferguson: Thinking of Painting. He has contributed essays to over thirty books and catalogues on artists including Walter Ostrom, John Greer, David Askevold, Graeme Patterson, Colleen Wolstenholme, Ned Pratt, and Garry Neill Kennedy. In 2022, Nimbus Publishing will publish his book Nova Scotia Folk Art: An Illustrated Guide.