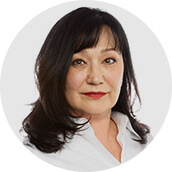 “Meeting with Robert Houle in his Toronto studio to prepare for his first solo exhibition, in Winnipeg, I was immediately struck and moved by his fearless determination to create awareness and make a difference in the treatment of Indigenous art and artists. His capacities as leader, catalyst, and committed agent of change are amplified by a subtle, empathetic, and humanistic approach, both personal and political, seen in all that he does in his daily life.”

Shirley Madill curated two solo exhibitions of work by Robert Houle—Indians from A to Z, 1990, and Sovereignty over Subjectivity, 1999—when she was curator of contemporary art and photography at the Winnipeg Art Gallery. Madill was chief curator and director of programming at the Art Gallery of Hamilton between 1999 and 2006 and later accepted the position of director and CEO at the Art Gallery of Greater Victoria. She returned to Ontario as director of the Rodman Hall Art Centre, Brock University, in 2008 and is currently executive director at the Kitchener-Waterloo Art Gallery. In 1993 Madill spent a residency in Valenciennes, France, at the École supériore des beaux-arts de Valenciennes as part of the Canada-France agreement with Canadian Heritage. She was the Canadian commissioner for the Bienal de São Paulo in 2004 featuring the work of David Rokeby. Her curatorial projects include Future Cities, Art Gallery of Hamilton, 2004; Sublime Embrace: Experiencing Consciousness in Contemporary Art, Art Gallery of Hamilton, 2006; David Hoffos: Scenes from the House Dream, Southern Alberta Art Gallery, Lethbridge, 2009, and Museum of Contemporary Canadian Art, Toronto, 2010; The Future of the Present, Scotiabank Nuit Blanche Toronto, 2011; Milutin Gubash, Kitchener-Waterloo Art Gallery, 2012; and Kent Monkman: Four Continents, Kitchener-Waterloo Art Gallery, 2016–17.