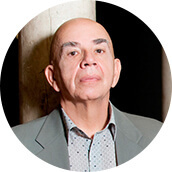 “My interest in Bertram Brooker was awakened when I researched and wrote about his troubled relationship with Lawren Harris. I soon learned about his commitment to producing a distinctively Canadian abstract art and about his relationship with similarly minded artists like Kathleen Munn. What stands out for me is how this advertising executive worked relentlessly in visual and literary forms to create genuinely modernist art in Canada. For me, he remains a brave, resourceful and courageous individual.”

James King is a professor of English at McMaster University. He was educated at the University of Toronto and Princeton University. He has been a John Simon Guggenheim Memorial Fellow, a Killam Fellow, and a Nuffield Fellow and has been the recipient of numerous research grants from the Social Sciences and Humanities Research Council of Canada. A Fellow of the Royal Society of Canada, King has authored six novels and nine biographies. His subjects have included Paul Nash, Lawren Harris, David Milne, and Greg Curnoe.