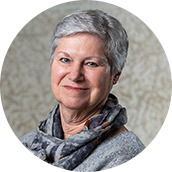 “Few artists have been able to accomplish the abstraction of pure emotion through cold, hard stone as Oviloo Tunnillie has. Her subjects are defined by what they feel, not what role they play in society. In fact, viewers may wonder if they are seeing work by an Inuit artist, as Oviloo’s sculpture crosses cultural lines.”

Dr. Darlene Coward Wight has researched and curated Inuit art for close to forty years. After receiving a BA (Hons) in Art History and an MA in Canadian Studies from Carleton University, she began working as the Fine Arts Curator for Canadian Arctic Producers (CAP) in 1981. CAP was the marketing agency for all Inuit-owned co-operatives across the Canadian Arctic. She made her first trip to the Arctic in 1982 to work with the carvers and co-ops in the communities of Taloyoak and Gjoa Haven. Her fascination with Inuit art, people, and culture was firmly established at that time. Over the next five years she travelled to many Arctic communities providing artistic advice to Inuit-owned co-operatives and the artists they represented. She organized numerous sales exhibitions and wrote many catalogues for art dealers internationally.

Wight has been the Curator of Inuit Art at the Winnipeg Art Gallery since 1986. In that time she has curated over ninety exhibitions and written twenty-six exhibition catalogues, as well as many smaller publications and articles. She is also the editor and major contributor for a book about contemporary Inuit art, Creation & Transformation: Defining Moments in Inuit Art (2012). The book received the Alexander Kennedy Isbister Award for Non-Fiction from the Manitoba Writers’ Guild in April 2013. She received an honorary Doctor of Letters from the University of Manitoba in 2012.