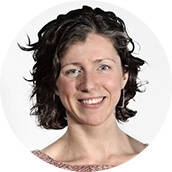 “Munn’s ink drawings of the Passion have intrigued me since I first saw them as a graduate student. I became fascinated by her work and her life: What made her turn to spiritual subjects? What made her give up colour and paint for ink and paper, while her contemporaries were bushwhacking in the Canadian wild? Why did she stop making art at the height of her creativity? Munn will always be a mystery—and this makes her all the more irresistible.”

Georgiana Uhlyarik is Fredrik S. Eaton Curator, Canadian Art, at the Art Gallery of Ontario (AGO). Upcoming projects at the AGO in 2018 include: Tunirrusiangit: Kenojuak Ashevak and Tim Pitsiulak, the reinstallation of the Indigenous and Canadian art galleries, and Christiane Pflug. Her recent curatorial projects and publications include international collaborations and partnerships: Florine Stettheimer: Painting Poetry (2017, with the Jewish Museum, NY), Georgia O’Keeffe (2017, with Tate Modern, London, and Bank Austria Kunstforum, Vienna), and Picturing the Americas: Landscape Painting from Tierra del Fuego to the Arctic (2016, with Terra Foundation for American Art and Pinacoteca do Estado de São Paulo). Her curatorial collaborations at the AGO include Rita Letendre: Fire & Light (2017), Introducing Suzy Lake (2015), The Passion of Kathleen Munn (2011), and Betty Goodwin: Work Notes (2011). Uhlyarik participated in an international research network exploring feminism and curating, funded by the Leverhulme Trust International Networks and led by Professor Lara Perry, University of Brighton (2010–12). She received her honours BA from the University of Toronto and her MA in art history from York University, where she is now adjunct faculty. Uhlyarik has recently been appointed research associate, Modern Literature & Culture, Ryerson University.