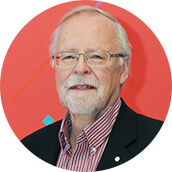 “Yves Gaucher’s work was the subject of my first Zacks Gallery exhibition at the AGO after I became the Curator of Contemporary Art. Gaucher shunned the word ‘retrospective,’ so we called the show Yves Gaucher: A Fifteen-Year Perspective, 1963–1978. While preparing the exhibition I became close friends with Yves and his wife, Germaine, and was a regular visitor to their house and to his studio in Montreal. I was fortunate, therefore, over the next many years, to be able to watch the evolution of Yves Gaucher’s work in real time, and had many opportunities to write further about it.”

Roald Nasgaard is an award-winning author and curator, Officer of the Order of Canada, and professor emeritus, Florida State University. He began his teaching career at the University of Guelph in 1971 and then served from 1974 to 1993 as curator of contemporary art and chief curator at the Art Gallery of Ontario (AGO). From 1995 to 2006 he chaired the art department and until 2011 taught art history at Florida State University.

During his tenure at the AGO he was responsible for a range of significant Canadian and international acquisitions. The many exhibitions he curated include solo shows for Canadian artists Yves Gaucher, Garry Neill Kennedy, Peter Kolisnyk, and Ron Martin. In 1985, in collaboration with Germano Celant, he produced the exhibition The European Iceberg: Creativity in Italy and Germany Today. He curated the first Gerhard Richter retrospective exhibition in North America in 1988.

Since 1994 Roald Nasgaard has written exhibition catalogue texts dedicated to the work of Trevor Bell, Charles Burchfield, Chris Cran, Jochen Gerz, John Heward, John Kissick, François Lacasse, Marie Lannoo, Guido Molinari, Odili Donald Odita, and William Perehudoff. He is the author of The Mystic North: Symbolist Landscape Painting in Northern Europe and North America, 1890–1940 (1984) and the highly respected Abstract Painting in Canada (2008). He co-wrote The Automatiste Revolution: Montreal 1941–1960 (2009) and curated the exhibition, which was ranked first in Canadian Art magazine’s Top 10 Exhibitions of 2009 in Canada. His book and exhibition The Plasticiens and Beyond: Montreal, 1955–1970 (2013), co-curated with Michel Martin, opened at the Musée national des beaux-arts du Québec to excellent reviews. Most recently he co-curated Mystical Landscapes (AGO, 2016, and Musée d’Orsay, 2017) and Higher States: Lawren Harris and His American Contemporaries (the McMichael Canadian Art Collection and Glenbow Museum, 2017).