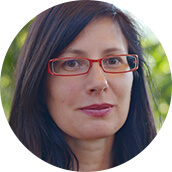 “Carr’s vision of the West Coast of Canada was a revelation to me as a young artist, born and raised in British Columbia, as was the rarity of her dual gifts, in creative writing and in visual art. In Victoria, where I lived for many years, I would sometimes hear stories from those who had living memories of her—even the small anecdotes were deeply inspiring to me. Especially moving was the realization that for Carr, finding a territory and a voice of her own was a lifelong journey.”

Lisa Baldissera is a PhD candidate at Goldsmiths, University of London and senior curator at Contemporary Calgary. In 2014 she curated the exhibition Convoluted Beauty: In the Company of Emily Carr, which considered Carr’s years in England to explore ideas of artistic identity, creative work in the public sphere, and failure, and The Tremendous Elusive: Emily Carr and the Canadian Imaginary, for the Canadian High Commission in London, UK.

Baldissera was previously chief curator at the Mendel Art Gallery in Saskatoon (2012–14). She holds an MFA in creative writing from the University of British Columbia and an MFA in art from the University of Saskatchewan. She was curator of contemporary art at the Art Gallery of Greater Victoria (1999–2009), where she produced more than fifty exhibitions of local, Canadian, and international artists. She has served on contemporary-art juries across Canada, including for the Saskatchewan Arts Board, the RBC Canadian Painting Competition, The Hnatyshyn Foundation, the Sobey Art Award, and the British Columbia Arts Council.

Baldissera’s recent curatorial projects include UTOPIA FACTORY (2017), which considered issues of urban planning, monuments, public art, and reconciliation-era questions in the building of a new art gallery; WILD: Fabricating a Frontier (2017, with M:ST Performative Art Festival and the Calgary Underground Film Festival), which examined and complicated frontier narratives in contested zones and settler colonial contexts; extratextual (2017–18), featuring over twenty Canadian and international artists who explored how modes of writing, textuality, and narrative have informed artistic production; and Never the Same: what (else) can art writing do? (2017, co-curated with Joanne Bristol), an international symposium on the agencies and futures of art writing.