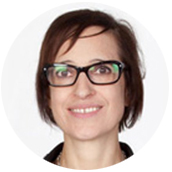 “I first became interested in Joyce Wieland’s art practice because of her idiosyncratic way of transforming national symbols. Eventually I realized that during the 1960s and 1970s Wieland created a varied and complex body of work, and that she deserves to be recognized as one of Canada’s most innovative twentieth-century artists.”

Johanne Sloan is Professor of Art History at Concordia University in Montreal. Her teaching and research encompass aspects of Canadian and international art since the 1960s, urban art and visual culture, and landscape art and aesthetics. She is the principal investigator for the collaborative research project Networked Art Histories: Assembling Contemporary Art in Canada, funded by the Social Sciences and Humanities Research Council of Canada (2013–16). She has written on the aesthetics of material culture (catalogue for Québec Triennial 2011, Musée d’art contemporain de Montréal), and has described how contemporary artists are reinterpreting the plein air artistic gesture (catalogue for À ciel ouvert: Le nouveau pleinairisme, Musée national des beaux-arts du Québec, 2012). She co-edited, with Rhona Richman Kenneally, Expo 67: Not Just a Souvenir (University of Toronto Press, 2010) and continues to conduct research on the expanded-cinema experiments at Montreal’s Expo 67. She also edited the interdisciplinary volume of essays Urban Enigmas: Montreal, Toronto and the Problem of Comparing Cities (McGill-Queen’s University Press, 2007).

She has published extensively on Joyce Wieland as an artist and filmmaker, including Joyce Wieland’s The Far Shore (University of Toronto Press, 2010), about Wieland’s 1976 feature film. She places Wieland in the context of countercultural and “new left” politics in “Joyce Wieland at the Border: Nationalism, the New Left, and the Question of Political Art in Canada” (Journal of Canadian Art History, 2005), and considers the conceptually inflected landscape art of both Joyce Wieland and Michael Snow in “Joyce Wieland and Michael Snow: Conceptual Landscape Art,” in Beyond Wilderness: The Group of Seven, Canadian Identity, and Contemporary Art, edited by John O’Brian and Peter White (McGill-Queen’s University Press, 2007).