Subversive, bold, unapologetic, and unforgiving, the work of Kent Monkman (b.1965) has left an unmistakable mark on contemporary Canadian art. Since the early 2000s, Monkman, accompanied by his time-travelling, shape-shifting, gender-fluid alter ego, Miss Chief Eagle Testickle, has redefined the Canadian cultural landscape. Riffing on techniques of the Old Masters, Monkman first found fame by recreating notable landscape paintings and populating them with Indigenous visions of resistance.

Kent Monkman: Life & Work is the first comprehensive book on one of the most important and internationally celebrated contemporary artists in Canada. Author Shirley Madill details Monkman’s youth in Manitoba, where he grew up as a member of the Fisher River First Nation. He was the child of missionary parents who lived in the Cree community of Shamattawa, and later in Winnipeg, where colonial realities left a deep impression on him. Monkman displayed incredible skill in art making at an early age. His first abstract works incorporated syllabics from his parents’ Cree hymnbook; soon, he began to directly engage with Indigenous experience and expression in art and culture.

“Kent Monkman is a visual storyteller. For more than two decades he has subverted art history’s established canon through the appropriation of works that tell stories of European domination and the oppression of North American Indigenous cultures.”
Shirley Madill

Described by the Globe and Mail as “about as famous as a living painter can be,” Monkman creates, according to the CBC, “the kind of art Canada needs right now.” Kent Monkman: Life & Work is a crucial addition to the Canadian Art Library, taking a deeper look at an artist who, quite literally, has made Canadian art history a contemporary conversation.

Shirley Madill is executive director of the Kitchener-Waterloo Art Gallery. She has held curatorial and director positions at the Winnipeg Art Gallery, the Art Gallery of Hamilton, the Art Gallery of Greater Victoria, and Rodman Hall Art Centre at Brock University in St. Catharines. One of Monkman’s earliest supporters, Madill first met the artist while he was still a high school student in Winnipeg, taking Saturday morning art classes at the Winnipeg Art Gallery. She went on to curate some of his first exhibitions and was a co-curator of the 2007 touring exhibition Kent Monkman: the triumph of mischief. Madill is the author of the Art Canada Institute publication Robert Houle: Life & Work. 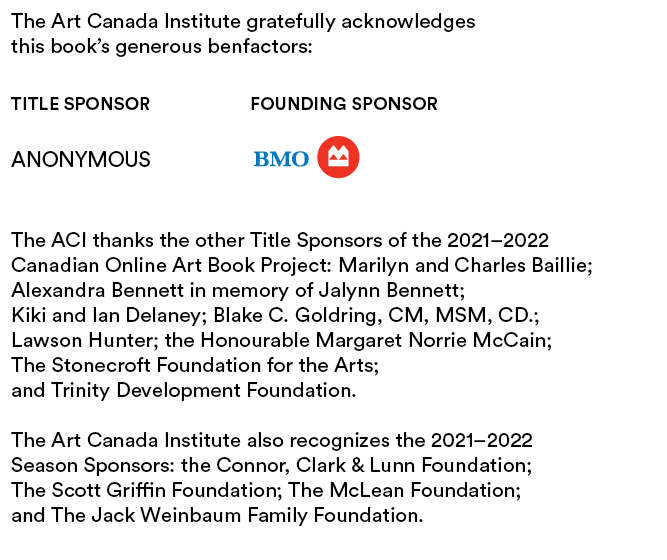