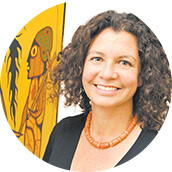 “I first became interested in Norval Morrisseau’s art when I stumbled upon an exhibition of his work in the Imperial Oil tower in downtown Calgary in the early 1980s. Having never seen anything like it, and drawn to his use of colour, line, and subject matter, I was, from then on, hooked on Morrisseau!”

Carmen Robertson is professor of art history at Carleton University, Ottawa, and held the position of associate professor of contemporary Indigenous art history at the University of Regina. A Lakota-Scottish scholar, she has long pursued and promoted the study of Indigenous arts and culture. Her current research involves a critical investigation of the work of Anishinaabe artist Norval Morrisseau, and her book Mythologizing Norval Morrisseau: Art and the Colonial Narrative in the Canadian Media was published in 2016 by University of Manitoba Press.

In addition to having published essays on Morrisseau’s work in scholarly journals and edited collections, Robertson co-authored the award-winning book Seeing Red: A History of Natives in Canadian Newspapers (2011) and has published a number of essays related to the constructed representations of Indigenous peoples in the Canadian press. As an independent curator she has curated and co-curated such exhibitions as Dana Claxton: The Sioux Project—Tatanka Oyate (MacKenzie Art Gallery 2017), Real Estate: Ceremonies of Possession (Art Gallery of Regina, 2007), and Clearing a Path: Traditional Indigenous Arts (2005) for the Saskatchewan Arts Board. She has also contributed curatorial essays to such exhibition catalogues as Bob Boyer: His Life’s Work (2008) and 7: Professional Native Indian Artists Inc. (2013).

When Robertson is not researching and writing, she spends long summer days canoeing and hiking with her husband and two daughters at their cabin in the Yukon.