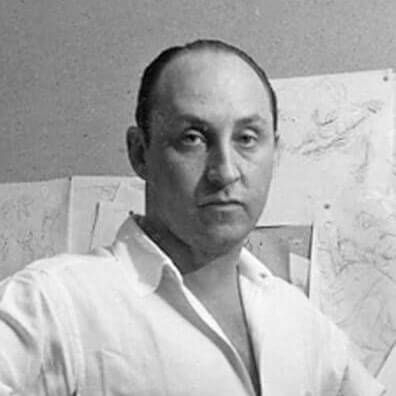 After escaping Nazi Europe, Oscar Cahén (1916–1956) made his name both as Canada’s foremost magazine illustrator and as one of its most renowned abstract painters. Before his tragic death at age 40, Cahén had executed countless covers for Maclean’s magazine and other publications while simultaneously founding the avant-garde collective Painters Eleven. Although he worked in Canada for only fourteen years and exhibited his paintings for a scant eight, his role in the development of both illustration and abstract painting in Canada was pivotal. He gave fellow artists and designers confidence to experiment and to stand up to conservative backlash, setting an inspirational example with his engaging art. For more on Oscar Cahén read Jaleen Grove’s Oscar Cahén: Life & Work.

Jaleen Grove is the Postdoctoral Fellow in Popular Print in the Douglas B. Dowd Modern Graphic History Library at Washington University, St. Louis. A Canadian art historian with specialization in illustration studies, she is co-editor of A History of Illustration (Bloomsbury, 2017) and Associate Editor of the Journal of Illustration. Grove also maintains a studio practice alongside her research and writing.