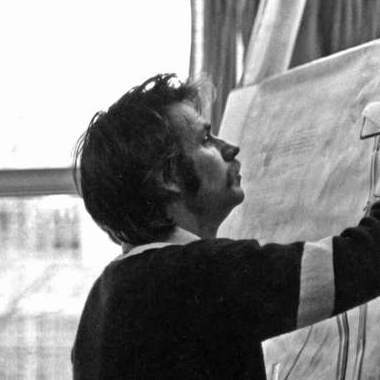 Greg Curnoe (1936–1992) was the driving force behind a regionalist sensibility that, beginning in the 1960s, made London, Ontario, an important centre for artistic production in Canada. While his oeuvre chronicled his own local and daily experience in a variety of media, it was grounded in twentieth-century art movements. He is remembered for brightly coloured works that often incorporate text to support his strong Canadian patriotism, sometimes expressed as anti-Americanism, as well as his activism in support of Canadian artists. For more on Greg Curnoe read Judith Rodger’s Greg Curnoe: Life & Work.

Judith Rodger is an art historian and adjunct professor at Western University and a cultural leader in London, Ontario. She has worked at Museum London, the Art Gallery of Ontario in Toronto, and the McIntosh Gallery at Western University. Rodger knew Greg Curnoe personally and professionally. In 1995 she began cataloguing his works and archives for the AGO; her interest in his work continues.