Passionately and unapologetically Canadian, artist and activist Greg Curnoe (1936–1992) transformed his hometown of London, Ontario, into an important city for artistic production. Born in 1936, he strongly rejected the idea of moving to “the centre”—Toronto or New York—and spearheaded London Regionalism, a movement that focused on everyday life and turned away from the metropolitan mores of the 1960s and 1970s art scene.

Greg Curnoe: Life & Work chronicles the artist’s significant and provocative career and documents how his striking and brightly coloured painting, sculpture, video, and photography made a powerful imprint on this country’s cultural landscape. It explores such milestones as Curnoe’s founding of Region magazine and the Region Art Gallery in the early 1960s; the channeling of his political philosophy into the cacophony of the experimental musical ensemble the Nihilist Spasm Band; and his cultivating a passion for cycling, which became a central theme in his work from the 1970s onward. This book also considers Curnoe’s formidable output and his documentation of daily experiences in a variety of media, influenced by Dada (with its emphasis on nihilism and anarchism), Canadian politics, and popular culture.

“Greg Curnoe made art from the ‘stuff’ of his everyday life, strongly rejected the idea of moving to ‘the centre’—Toronto or New York—and was passionately and unapologetically Canadian.”Judith Rodger

Despite Curnoe’s untimely demise—in 1992 when he was fatally hit by a truck while riding his bike—he changed artmaking in Canada with his anti-establishment and nationalist politics and by bringing regional artists into political discourse. He is remembered for his luminous depictions that often incorporate text to support his strong patriotism (sometimes expressed as anti-Americanism) as well as his activism in support of Canadian artists.

Judith Rodger, a freelance curator and art historian based in London, Ontario, has worked at Museum London, Art Gallery of Ontario in Toronto, and McIntosh Gallery at Western University in London, Ontario. She knew Greg Curnoe personally and professionally. A sustained interest in Curnoe’s art and life began in 1995 with the cataloguing of his works and archival papers. 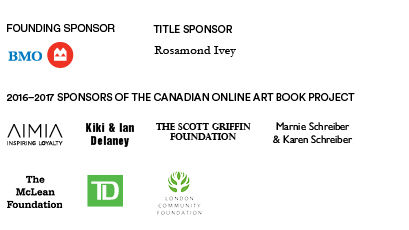