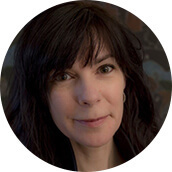 “As a student at the National Gallery I came across a series of gem-like drawings by Pitseolak, so lively and colourful that they seemed to glow. I realized that even with a famous artist like Pitseolak, there was still much to learn. As I began to go through her thousands of drawings for my research, I gained a deep respect for her dedication to her art. A photograph of Pitseolak, drawing in her tent, hangs over my desk to inspire me to work hard.”

Christine Lalonde is Curator of Indigenous Art at the National Gallery of Canada. She has worked with Inuit artists across the North since the mid-1990s. She remains actively engaged with the arts community, frequently travelling to events in northern communities and urban centres in Canada and abroad.

Since completing her MA thesis on the drawings of Pitseolak Ashoona, she has held several different curatorial positions at the National Gallery of Canada. Her many exhibition projects have advanced an appreciation for Inuit artists across the country and have reached new international audiences, such as Sanaugavut: Inuit Art from the Canadian Arctic, held at the National Museum in New Delhi in 2010. The scope of her knowledge and interest encompasses both historic and contemporary art, as seen in two simultaneous travelling exhibitions in 2005: ItuKiagâtta! Inuit Sculpture from the Collection of the TD Bank Financial Group, which focused on works from the earliest periods, acquired by the bank to mark Canada’s centennial in 1967; and Inuit Sculpture Now, which featured sixteen sculptors who have been leaders in their art since the 1990s. With the critically acclaimed exhibition Sakahàn: International Indigenous Art she worked with Indigenous artists around the world, bringing their artwork into dynamic and thought-provoking dialogue.

Recognized for her commitment to new methodologies, Lalonde has explored experimental approaches to presenting work by Indigenous artists, providing a balance between commemorating their artistic accomplishments and raising awareness of critical issues. She is widely published in exhibition catalogues, critical essays, and articles. In 2014, as editor of Inuit Art Quarterly, she relaunched the publication with an issue dedicated to Kenojuak Ashevak, and in the following issue featured contributions by several Inuit authors. She continues as the Chair of the Editorial Board for Inuit Art Quarterly.