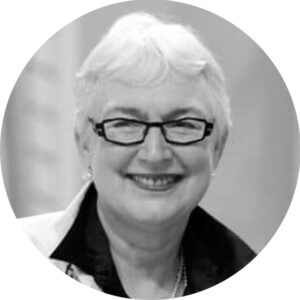 “Researching Pegi Nicol MacLeod, a war artist, took me to the Canadian War Museum for the first time in 1984. In the vault, surrounded by military art, I knew at once that this was where I wanted to work. I’ve never stopped.”

Laura Brandon was the Historian, Art and War, at the Canadian War Museum from 1992 until 2015. She is currently an adjunct research professor in Carleton University’s School for Studies in Art and Culture and the Department of History. She is the author of Pegi by Herself: The Life of Pegi Nicol MacLeod, Canadian Artist (2005), which won the Ontario Historical Society’s Alison Prentice Award for the best book in women’s history in the preceding three years. For over four decades, she has focused on war, writing and lecturing extensively on contemporary and historical Canadian and international art and artists. Her war art books include Art or Memorial? The Forgotten History of Canada’s War Art (2006), Art and War (2007), and, with Dean Oliver, Canvas of War: Painting the Canadian Experience (2000). She has curated more than forty-five exhibitions, a majority on war art, which have travelled widely in Canada and internationally. Canvas of War toured Canada from 2000 until 2004 and was seen by 400,000 visitors. In 2001, it received the Canadian Museums Association Award of Excellence in the exhibitions category. Brandon has a BA in History and Art History from the University of Bristol, England; an MA in Art History from Queen’s University, Canada; and a PhD in History from Carleton University, Canada. She is a Member of the Order of Canada.